In 1986 the American Society of Anesthesiologists adopted pulse oximetry and end-tidal CO2 monitoring as standards of care.  These two monitors were our specialty’s major advances in the 1980’s, and made anesthesia safer for everyone. What are the most significant advances affecting anesthesia since that time? As a clinician in private practice, I’ve personally administered over 20,000 anesthetics in the past quarter century.  Based on my experience and observations, I’ve assembled my list of the Top Ten Most Useful Advances Affecting Anesthesia from 1987-2012.  I’ve also assembled my list of the Five Most Overrated Advances Affecting Anesthesia from 1987-2012. 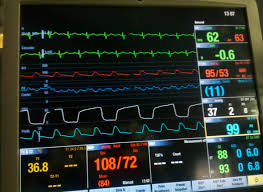 #10. The cell phone (replacing the beeper).  Cell phones changed the world, and they changed anesthesia practice as well.  Before the cell phone, you’d get paged while driving home and have to search to find a payphone.  Cell phones allow you to be in constant contact with all the nurses and doctors involved in your patient’s care at all times.  No one should carry a beeper anymore.

#9. Ultrasound use in the operating room.  The ultrasound machine aids peripheral nerve blockade and catheter placement, and intravascular catheterization.  Nerve block procedures used to resemble “voodoo medicine,” as physicians stuck sharp needles into tissues in search of paresthesias and nerve stimulation.  Now we can see what we’re doing.

#8.  The video laryngoscope.  Surgeons have been using video cameras for decades.  We finally caught up.  Although there’s no need for a video laryngoscope on routine cases, the device is an invaluable tool for seeing around corners during difficult intubations.

#7.  Rocuronium.  Anesthesiologists long coveted a replacement for the side-effect-ridden depolarizing muscle relaxant succinylcholine.  Rocuronium is not as rapid in onset as succinylcholine, but it is the fastest non-depolarizer in our pharmaceutical drawer.  If you survey charts of private practice anesthesiologists, you’ll see rocuronium used 10:1 over any other relaxant.

#6.  Zofran.  The introduction of ondansetron and the 5-HT3 receptor blocking drugs gave anesthesiologists our first effective therapy to combat post-operative nausea and vomiting.

#5. The ASA Difficult Airway Algorithm.  Anesthesia and critical care medicine revolve around the mantra of “Airway-Breathing-Circulation.”  When the ASA published the Difficult Airway Algorithm in Anesthesiology in 1991, they validated a systematic approach to airway management and to the rescue of failed airway situations.  It’s an algorithm that we’ve all committed to memory, and anesthesia practice is safer as a result.

#4.  The internet.  The internet changed the world, and the Internet changed anesthesia practice as well.  With Internet access, clinicians are connected to all known published medical knowledge at all times.  Doctors have terrific memories, but no one remembers everything.  Now you can research any medical topic in seconds. Some academics opine that the use of electronic devices in the operating room is dangerous, akin to texting while driving.  Monitoring an anesthetized patient is significantly different to driving a car.  Much of O.R. monitoring is auditory.  We listen to the oximeter beep constantly, which confirms that our patient is well oxygenated.  A cacophony of alarms sound whenever vital signs vary from norms.  An anesthesia professional should never let any electronic device distract him or her from vigilant monitoring of the patient.

#3.  Sevoflurane.  Sevo is the volatile anesthetic of choice in community private practice, and is a remarkable improvement over its predecessors.  Sevoflurane is as insoluble as nitrous oxide, and its effect dissipates significantly faster than isoflurane.  Sevo has a pleasant smell, and it replaced halothane for mask inductions.

#2.  Propofol.  Propofol is wonderful hypnotic for induction and maintenance.   It produces a much faster wake-up than thiopental, and causes no nausea.  Propofol makes us all look good when recovery rooms are full of wide-awake, happy patients.

THE FIVE MOST OVERRATED ADVANCES AFFECTING ANESTHESIA IN THE PAST 25 YEARS (1987-2012):

#5.   Office-based general anesthesia.  With the advent of propofol, every surgeon with a spare closet in their office became interested in doing surgery in that closet, and they want you to give general anesthesia there.  You can refuse, but if there is money to be earned, chances are some anesthesia colleague will step forward with their service.  Keeping office general anesthesia safe and at the standard of care takes careful planning regarding equipment, monitors, and emergency resuscitation protocols.  Another disadvantage is the lateral spread of staffing required when an anesthesia group is forced to cover solitary cases in multiple surgical offices at 7:30 a.m.  A high percentage of these remote sites will have no surgery after 11 a.m.

#4.  Remifentanil.  Remi was touted as the ultra-short-acting narcotic that paralleled the ultra-short hypnotic propofol.  The problem is that anesthesiologists want hypnotics to wear off fast, but are less interested in narcotics that wear off and don’t provide post-operative analgesia.  I see remi as a solid option for neuroanesthesia, but its usefulness in routine anesthetic cases is minimal.

#3.  Desflurane.  Desflurane suffers from not being as versatile a drug as sevoflurane.  It’s useless for mask inductions, causes airway irritation in spontaneously breathing patients, and causes tachycardia in high doses.  Stick with sevo.

#2.  The BIS Monitor.  Data never confirmed the value of this device to anesthesiologists, and it never gained popularity as a standard for avoiding awareness during surgery.

#1.  The electronic medical record.  Every facet of American society uses computers to manage information, so it was inevitable that medicine would follow. Federal law is mandating the adoption of EMRs.  But while you are clicking and clicking through hundreds of Epic EMR screens at Stanford just to finish one case, anesthesiologists in surgery centers just miles away are still documenting their medical records in minimal time by filling out 2 or 3 sheets of paper per case. Today’s EMRs are primitive renditions of what will follow. I’ve heard the price tag for the current EMR at our medical center approached $500 million.  How long will it take to recoup that magnitude of investment?  I know the EMR has never assisted me in caring for a patient’s Airway, Breathing, or Circulation in an acute care setting.  Managing difficulties with the EMR can easily distract from clinical care.  Is there any data that demonstrates an EMR’s value to anesthesiologists or perioperative physicians?

Your Top Ten List and Overrated Five List will differ from mine.  Feel free to communicate your opinions to me at rjnov@yahoo.com.

As we read this, hundreds of companies and individuals are working on new products.  Future Top Ten lists will boast a fresh generation of inventions to aid us in taking better care of our patients.