How common is awareness under general anesthesia? In 2007, Hollywood released the movie Awake, in which the protagonist, played by Hayden Christensen (Anakin Skywalker from Star Wars) is awake during the general anesthetic for his heart surgery, and overhears the surgeon’s plan to murder him.  Producer Joana Vicente told Variety that Awake “will do to surgery what Jaws did to swimming in the ocean.” The movie trailer airs a statement that states, “Every year 21 million people are put under anesthesia. One out of 700 remain awake.” 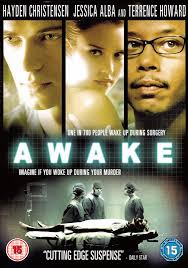 Awake was not much of a commercial success, with a total box office of only $32 million, but the film did publicize the issue of intraoperative awareness under general anesthesia, a topic worth reviewing.

If you undergo general anesthesia, do you have a 1 in 700 chance of being awake?  If you are a healthy patient undergoing routine surgery, the answer is no.  If you are sick and you are having a high-risk procedure, the answer is yes.

A key publication on this topic was the Sebel study. The Sebel study was a prospective, nonrandomized study, conducted on 20,000 patients at seven academic medical centers in the United States. Patients were scheduled for surgery under general anesthesia, and then interviewed in the postoperative recovery room and at least one week after anesthesia.

A total of 25 awareness cases were identified, a 0.13% incidence, which approximates the 1 in 700 incidence quoted in the Awake movie trailer. Awareness was associated with increased American Society of Anesthesiologists (ASA) physical status, i.e. sicker patients.  Assuming that approximately 20 million anesthetics are administered in the United States annually, the authors postulated that approximately 26,000 cases of intraoperative awareness occur each year.

1. Patients with a history of substance abuse or chronic pain.

2. American Society of Anesthesiologists (ASA) Class 4 patients (patients with a severe systemic disease that is a constant threat to their life) and others with limited cardiovascular reserve.

4. The use of neuromuscular paralyzing drugs during the anesthetic.

The causes of intraoperative awareness include:

1. Intentionally light anesthesia administered to patients who are hypotensive or hypovolemic, or those with limited cardiovascuar reserve.

4. Some patients have higher anesthetic requirements, due to chronic alcohol or drugs.

Empty vaporizers with no potent anesthetic liquid inside

Syringe swap, or mislabeling of a syringe

6. Difficult intubation, in which the anesthesia provider forgets to give supplementary IV doses of hypnotics.

7. Choice of anesthetic.  In multiple trials, the use of neuromuscular blockers is associated with awareness.

8. Some studies show a higher incidence of awareness with total intravenous anesthesia or nitrous-narcotic techniques.

What are the legal implications of intraoperative awareness?

The Domino study reported that cases of awareness represented 1.9% of malpractice claims against anesthesiologists. Deficiencies in labeling syringes and vigilance were common causes for awake paralysis. The patients’ vital signs were not classic clues:  hypertension was present in only 15% of recall cases, and tachycardia was present in only 7%.

What are the consequences of intraoperative awareness?

The following consequences have been reported from the Samuelsson study:

1. Recollections of auditory perceptions and a sensation of paralysis.  Anxiety, helplessness, and panic.  Pain is described less frequently.

What about BIS Monitoring?

Bispectral Index monitoring, or BIS monitoring, uses a computerized algorithm to convert a single channel of frontal EEG into an index score of hypnotic level, ranging from 100 (awake) to 0 (isoelectric EEG).

The BIS monitor was FDA-approved in 1996.  A BIS level of 40 – 60 reflects a low probability of consciousness during general anesthesia.  BIS measures the hypnotic components of anesthesia (e.g. effects of propofol and volatile agents), and is relatively insensitive to analgesic components (e.g. narcotics) of the anesthetic.  The BIS monitor is neither 100% sensitive nor 100% specific.

In 2005, the American Society of Anesthesiologists published its Practice Advisory for Intraoperative Awareness.  The anesthesia practitioner is advised to do the following:

3. Patients considered to be at increased risk of intraoperative awareness should be informed of the possibility when circumstances permit.

4. Preinduction checklist protocol for anesthesia machines and equipment to assure that the desired anesthetic drugs and doses will be delivered.  Verify IV access, infusion pumps, and their connections.

5. The decision to administer a benzodiazepine prophylactically should be made on a case-by-case basis for selected patients.

6. Intraoperative monitoring of depth of anesthesia, for the purpose of minimizing the occurrence of awareness, should rely on multiple modalities, including clinical techniques (e.g., ECG, blood pressure, HR, end-tidal anesthetic gas analyzer, and capnography)…. Brain function monitoring is not routinely indicated for patients undergoing general anesthesia, either to reduce the frequency of intraoperative awareness or to monitor depth of anesthesia…. The decision to use a brain function monitor should be made on a case-by-case basis by the individual practitioner of selected patients (e.g. light anesthesia).

Published suggestions for the prevention of awareness include:

1. Premedication with an amnestic agent.

4. Supplementing nitrous/narcotic anesthesia with 0.6% MAC of a volatile agent.

6. Confirming delivery of anesthetic agents to the patient

In 2006, the California Society of Anesthesiologists released the following Statement on Intraoperative Awareness:

“ . . . Anesthesiologists are trained to minimize the occurrence of awareness under general anesthesia.  It is recognized that on rare occasions, usually associated with a patient’s critical condition, this may be unavoidable.  Furthermore, it is commonplace in contemporary anesthetic practice to employ a variety of techniques using regional nerve blocks and varying degrees of sedation.  Patients often do not make an distinction between these techniques and general anesthesia, yet awareness is often expected and anticipated with the former.  This may have led to a misunderstanding of ‘awareness’ during surgery by many patients.”

In 2011, the New England Journal of Medicine, arguably the most prestigious medical journal in the world, published a study looking at using the BIS monitor for the prevention of intraoperative awareness. Prevention of intraoperative awareness in a high-risk surgical population). The researchers tested the hypothesis that a protocol incorporating the electroencephalogram-derived bispectral index (BIS) was superior to a protocol incorporating standard monitoring of end-tidal anesthetic-agent concentration (ETAC) for the prevention of awareness. They randomly assigned 6041 patients at high risk for awareness to either BIS-guided anesthesia or ETAC-guided anesthesia. Results showed that a total of 7 of 2861 patients (0.24%) in the BIS group, as compared with 2 of 2852 (0.07%) in the ETAC group, had definite intraoperative awareness.  The superiority of the BIS protocol was not established.  Contrary to expectations, fewer patients in the ETAC group than in the BIS group experienced awareness.

The best defense against intraoperative awareness will always be the presence of a well-trained and vigilant physician anesthesiologist.