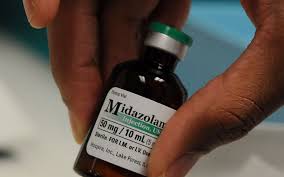 Prior to the execution, medical officials tried for nearly an hour to find a vein in Clayton Lockett’s arms, legs and neck before finally inserting an IV into his groin, prisons director Robert Patton wrote in a letter to the governor May 1st detailing Lockett’s last day.

In the middle of the injection process, the convict was observed to cry out, “Man,” “I’m not,” and “something’s wrong,” before the blinds were closed to witnesses. Lockett died of a heart attack 43 minutes after the first drug was injected.

Dean Sanderford, Lockett’s attorney, stated his client’s body “started to twitch,” and then “the convulsing got worse. It looked like his whole upper body was trying to lift off the gurney. For a minute, there was chaos.”

After administering the first drug, “We began pushing the second and third drugs in the protocol,” said Oklahoma Department of Corrections Director Robert Patton. “There was some concern at that time that the drugs were not having the effect. So the doctor observed the line and determined that the line had blown.” He said that Lockett’s vein had “exploded.”

CNN further states that, “Oklahoma had announced the drugs it planned to use: midazolam; vecuronium bromide to stop respiration; and potassium chloride to stop the heart. Two intravenous lines are inserted, one in each arm. The drugs are injected by hand-held syringes simultaneously into the two intravenous lines. The sequence is in the order that the drugs are listed above. Three executioners are utilized, with each one injecting one of the drugs.”

The article further states that, “The doctor checked the IV and reported the blood vein had collapsed,and the drugs had either absorbed into tissue, leaked out or both,” according to the timeline. The director of the corrections department then asked whether Lockett had been given enough of the drug combination to kill him, and the doctor said “no.” “Is another vein available? And if so, are there enough drugs remaining?” the doctor was asked, according to the timeline.

The doctor’s answer to both questions: “No.”

Lockett’s attempted execution was carried out at the Oklahoma State Penitentiary in McAlester, where he had been housed following his conviction and death sentence for shooting Stephanie Nieman and then watching as two others buried her alive in 1999.

What happened in this apparent “botched” execution? I have no additional information other than what has been published in the lay press, but as an anesthesiologist I can make some inferences:

In the three drug combination of midazolam, vecuronium, and potassium chloride, each drug has a specific purpose. The sedative midazolam is intended to make the convicted murderer fall asleep. Midazolam (Versed) is a benzodiazepine, a drug commonly given immediately prior to surgery to relieve a patient’s anxiety. A typical adult dose is 2 mg. Midazolam is also commonly used for conscious sedation for colonoscopy procedures, when repeated 1 – 2 mg doses are titrated for relaxation. Let’s assume an executioner administered massive overdoses in the range of 50 mg of midazolam. This dose should reliably guarantee unconsciousness, unless the intravenous catheter is not properly placed inside the vein. If the IV infiltrates, only a portion of the midazolam circulates in the bloodstream, and the expected unconsciousness may not be obtained.

The second drug, vecuronium, is a paralyzing drug. Anesthesiologists commonly inject vecuronium prior to or during surgical anesthetics. Anesthesiologists first administer a hypnotic drug such as propofol to insure unconsciousness, and then administer a muscle relaxant drug such as vecuronium to paralyze the patient so a metal laryngoscope can be inserted into the patient’s mouth to facilitate the placement of a breathing tube into the trachea. The anesthesiologist will then support ventilation of the patient’s lungs by connecting the breathing tube to a ventilator. The paralyzed patient is unable to breathe on their own, and without the controlled ventilation the patient would die within minutes. This is the rationale of using vecuronium in a lethal injection cocktail. The other rationale in using a paralyzing drug such as vecuronium is that a paralyzed individual will not writhe or seize during the death process.

A concentrated dose of potassium chloride causes sudden cardiac arrest by ventricular fibrillation of the heart.

Why did the Oklahoma execution not go smoothly? As reported in the press, the intravenous line infiltrated. Why does this happen? The intravenous line was either improperly inserted, improperly secured, or it dislodged. The success of a lethal injection depends specifically on the lethal drugs being reliably delivered into the convict’s vein via a properly running IV line.

Some individuals have difficult IV access, which apparently was the case in the convict Lockett. Medical personnel typically place IV’s in arm veins, followed by legs, neck or groin as alternate locations. The placement of an IV in the groin, as was reported in Lockett’s case, is typically done by a physician, utilizing a longer IV catheter called a central venous catheter or CVP catheter. In modern hospitals, this CVP placement is often done using ultrasound imaging for increased accuracy and success. In a hospital setting, CVP placement would be done by an M.D., not by a nurse or a technician.

Dr. Jack Kevorkian invented a euthanasia machine for assisted suicide. His machine injected three drugs that parallel the drugs used in Oklahoma: the sleep drug sodium thiopental, the paralyzing drug pancuronium, and potassium chloride. In 1999 Kevorkian was arrested for his role in executing patients in the fashion. Kevorkian was convicted of second-degree murder.

The manufacturer of the sleep drug sodium thiopental has banned the use of the product for lethal injection of prisoners. Because of this ban, there have been recent occurrences of midazolam replacing thiopental in the lethal injection recipe in the United States in 2014.

A second midazolam execution occurred in January 2014, during the lethal injection of convicted murderer Dennis McGuire at the Southern Ohio Correctional Facility in Lucasville, Ohio. This was the first time any state used the combination of midazolam and hydromorphone for an execution. It was reported that McGuire took 15 minutes to die. A reporter who witnessed the execution described McGuire as struggling, gasping loudly, snorting and making choking noises for nearly 10 minutes before falling silent and being declared dead a few minutes later. Dennis McGuire’s execution was discussed in an earlier blog entry (http://theanesthesiaconsultant.com/2014/01/16/january-2014-lethal-injection-with-midazolam-and-hydromorphone/).

Is midazolam an inferior drug to sodium thiopental for lethal injection? Probably not. In sufficiently high doses, midazolam will make any individual unconscious. An apparent flaw in McGuire’s case was the absence of a paralyzing drug and potassium chloride in the recipe. The apparent flaw in Lockett’s case was the absence of a reliable functioning IV.